This is page 2 of the tutorial, where I’ll put together several of the baby steps from page 1 into something that mirrors the final application. I’ll also put the Docker image on the Docker hub using the automated build technique, which has several advantages over other methods.

Back to Page 1 of the tutorial

This final example in the ‘Hello World’ category closely mirrors what I want to do:

This is found in the DockerHelloWorldProject3 folder, from the Github repository accompanying these pages here.

In this script, if the DO_DEMO environment variable is selected, then an input file to demonstrate the code is copied over into /write_directory, which is bindmounted to the user’s machine.

Then the C++ code is on publically on Github, and a little more involved, but just reads the read.txt and writes it to write.txt, with some “Hello world!” messages.

Now, you can run in similar ways to hello2.

And the write.txt file returns:

Put the container on Docker hub with an automated build

Now, at this stage you have a Docker container that works great on your local machine. But the point of Docker is deployment – and getting your awesome stuff to work on other people’s machines. It is possible to push your container to your Docker hub account (I do assume you have signed up for at least a free community edition Docker account), some documentation is here.

However, my experience is that push is slow, and likely to time out on certain internet connections. The cool kids are all using automated builds. The way this works is that you put everything from the folder where the Dockerfile resides in a repository, either Github or Bitbucket, link from Docker hub, and then Docker pulls from the repository and builds in Docker land. Confusingly, the basket where your items live in Docker land is also called a repository. So there’s no upload from your machine.

Automated builds are just as slow for large images, but you don’t have to pull and push images, so you save that time babysitting the command line, and there’s a convenient email notification when the build fails or is successful. Since we have extensively tested the Docker container in the DockerHelloWorldPRoject3 folder, we’ll use that as a test for automated builds.

Create a Github (or Bitbucket) repository with the files. Mine is https://github.com/amy-tabb/docker-hello-tutorial-automated, which you can clone or fork to play around with. 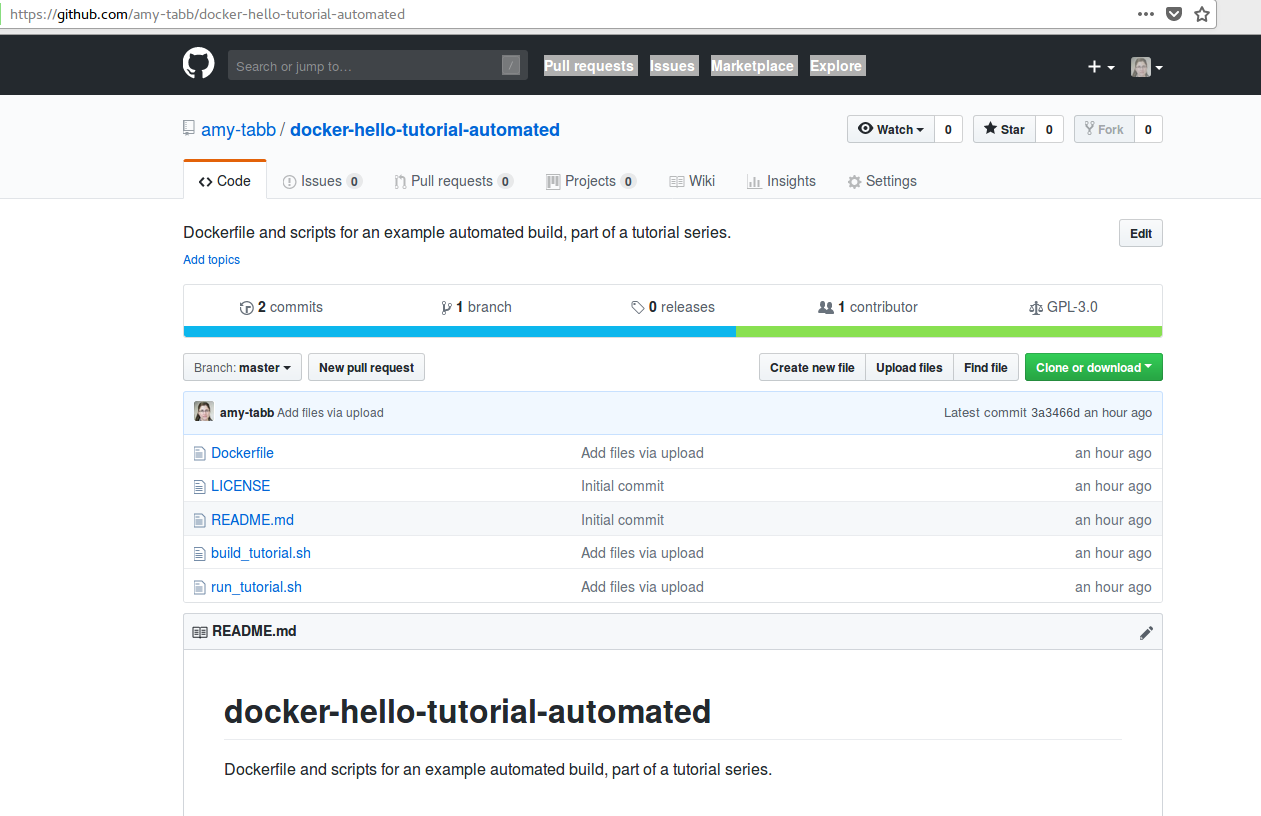 Under build settings, select the Trigger button to trigger the build process.

Step 5. Wait. Or find something else to do. Seriously!

This screen will display the build process, but not auto-update. I refresh the screen every so often. This process takes quite a while, for one’s own sanity while getting Docker containers set up, it is useful to have another project you can work on as well. There are a lot of 1-2 hour build times – especially in the next section of the tutorial. Once you see the following screen, with that magical green Success text and green checkmark, everything is ready to roll! If not, you will get some error messages.

Now, our Docker image is on the Docker hub, in its own repository, and it is time to test. First, pull. Like Github, there’s a handy copy icon on the right-hand side of the page, from Repo info.

Then I test using some of the arguments from before, but now the tag of this image is one from the automated build,amytabb/docker-hello-tutorial-automated, instead of hello3:

The output is as expected, so we’re all done here.