The goal of this section is to demonstrate by example how to set up Dockerfiles for the backend of deploying your code and projects on Docker hub – the OS, the required packages, and specialized libraries that may need to be imported via git and built via cmake. In this page we’ll do both with the OpenCV library. All of the examples are available as public Github and Docker repositories, and the links are provided near the examples.

A side note – I have been using OpenCV since the early days (vs 1.0), when it was supported by Intel. IplImages, anyone?

Back to Page 1 of the tutorial

Back to Page 2 of the tutorial

Getting started, principles of layering

The basic idea as hinted at from the previous page is to create an image that imports from another image, using the FROM keyword.

So conveniently, Ubuntu has the different versions of the OS on docker, so we can pull directly (docker pull ubuntu:16.04) to the local machine, or include it in Dockerfiles, in the form of FROM ubuntu:16.04. I’m using Ubuntu 16.04, but of course you can apply this to any other version you wish.

Keep images as small as possible

The idea here is only install packages and libraries that are necessary for the goal applications. Everything you install will result in additional bytes/MBs, which results in a larger image and download time for a user. So go for the bare minimum, unlike in your personal machines, where I at least tend to install my usual suite because I know I’ll need it eventually.

Each line is a layer, make it as small as possible

Technically you can string together many statements using && with the \ character at the end of the line. You’ll want to consier how this may affect layer size. The exception is apt-get update && apt-get install -y, which should be combined. (See best practices page for the details).

Build a succession of images for maximum reuse

This idea is that intead of creating one huge image for one application, we can create a succession of images. Then, for a range of applications we can combine them and reuse them. The added upside is that like iterative testing of C++ programs, it is easier to find where the errors are when you use this approach, and I will illustrate this.

This example is very straightforward: I import the ubuntu:16.04 image, and then install the build-essential packages, along with all of the libraries that I know are going to be needed for OpenCV, which I use in almost every project, and OpenMP. Here’s the Dockerfile:

While this is simple, you can also grab it from Github.

To do local testing, in the folder with this Dockerfile you would

Here, I gave this repository the tag ubuntu-essentials. Like on page 2, you could also create an automated build for this repository; this one is here on the Docker Hub. Recall that we used this repository as the FROM statement in the first part of the tutorial.

Since I’ve been explicit with “you have to refer to the container with the right tag,” I will dispense with it from now on. We’re assuming the image has tag ubuntu-essentials, and we can run it, and play around.

gives us a bash shell in the image, at location /. To get out of the image, type exit.

An important disclaimer, in 2020. This will not work on Docker hub with an automated build, given the size of the OpenCV libraries and some of the limitations imposed on free accounts on Docker hub. However, for smaller libraries it may work, and the principles in the tutorial will hold for other libraries. You can also build locally on your machine and push to Docker hub, which is what I started doing in late ~2019 to incorporate OpenCV 4.x libraries.

This next section will detail importing a library’s source files using git, and then building it using a script that contains cmake. Like the previous example, this one is also on Github and Docker hub and public repositories. After I go over the structure, I’ll mention some handy debugging strategies.

This repository consists of a Dockerfile and a build script:

OpenCV uses cmake to compile, link and install the library. This cmake command is about as bland as you can make it for OpenCV installation, and installing OpenCV can take a long time (even on a local machine). If you happen to be installing a library like OpenCV, I suggest hammering out the cmake arguments and shell script on your local machine, then shifting to the Dockerfile. For instance, in future projects with Docker I’ll need the OpenCV contrib module, which is why I don’t delete the OpenCV source files from the Dockerfile; I’ll need them when I rebuild the library with the additional module.

By now, you’re a pro, but I’ll be explicit. To build locally within a directory with both the Dockerfile and script:

And you can run:

What I’m really interested in here is that the library installed correctly. So I cd /usr/local/lib, where from the cmake arguments I know the libraries should be. They are in the right spot! 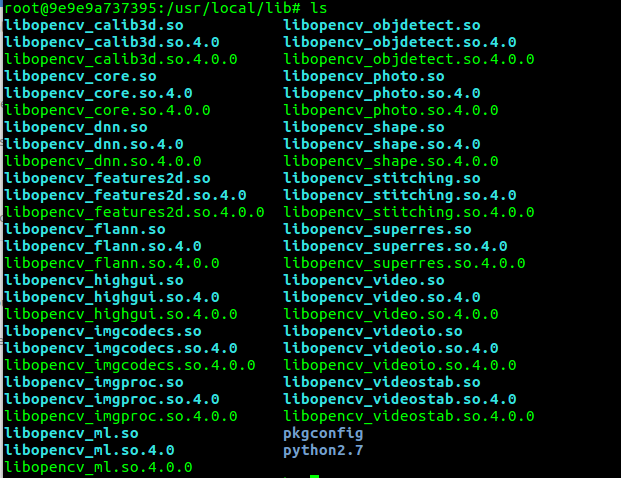 As I have alluded to in the previous pages, I have not had great luck in using push to get large images to Docker hub; but automated builds have worked well using repositories on Github (or Bitbucket). Details are here.

In general, though, creating chains of images and using run to get the right commands helps greatly with sorting out issues when you are learning. For instance, I chained images until I figured out how to put together Dockerfiles. I tended to only include one or two lines in a file. Here’s an example, using the Ubuntu OpenCV as a case:

The git clone takes a while for this library and is unlikely to fail unless my internet connection died. I didn’t want to keep waiting for the cloning to complete, so I made it its own image. Then build:

You guessed it! Stage 1. It is perhaps obvious, but you will need different Dockerfiles and directories if you want to remember what these all were.

Then WORKDIR is not likely to fail, so I put it in with running the shell script. If I got WORKDIR wrong, the script would fail immediately.

Suppose something’s wrong, the script failed. I can go backwards and revise:

Then use run to troubleshoot where we are and the script: